Even when there is no one inside, it's still a full house. A video.

I had a friend over and all evening both of us had a very, but familiar feeling of being watched. We both pointed to the same area when discussing it, so when we went outside to take my dog, Dexter out we quickly set up one of our phones to record the room when we left. This is what we got... Breakdown: 1:28 you can hear me leaving the house with Dexter, door closing. 1:54 You can hear Gaby leave when the door slams. 2:16 Footsteps start to be heard, like someone is walking around the room 3:13 A female Disembodied voice can be heard 5:30 A loud bang of an unknown source
Posted by Xesia at 3:12 PM No comments:

I was outside on the deck reading, tea in hand, dog by my side.. Nothing out of the ordinary. Then, suddenly I felt a burning sensation on my hand, wrist, and lower arm area. I noticed what looked like burns on my skin. They looked Like contact burns, but I had not moved in a good 20 minutes. Dexter and I had been just relaxing, It was a lovely 73°, so no way it could be from the sun. Plus the half Mexican in me only tans, not burns.
As the hours went on, it only got worse! It was so sore, it began to show a fluid on top like a fresh burn, and then began getting more red and pronounced. As you can see in my photos, hours later I looked down at my arm, and not only saw the burn marks, but I also saw lines all up my forearm. Perfect, evenly spaces lines.. Like some kind of metal object with blades evenly placed had been on my arm. I thought I was seeing things, but there it was.. and when I asked my roommate about it, he was just as puzzled as I was.
As the night went on, the burns hurt more and more and clearly at this point looked like burns from a grill, oven or some other kind of surface burn. They lasted for days...
I know, I didn't burn myself,I wonder what did?

Right after I felt the burn.

It then spreads, and gets more red.

It's very sore, and no amount of pain cream is helping. You can start to see the lines. More Ice! 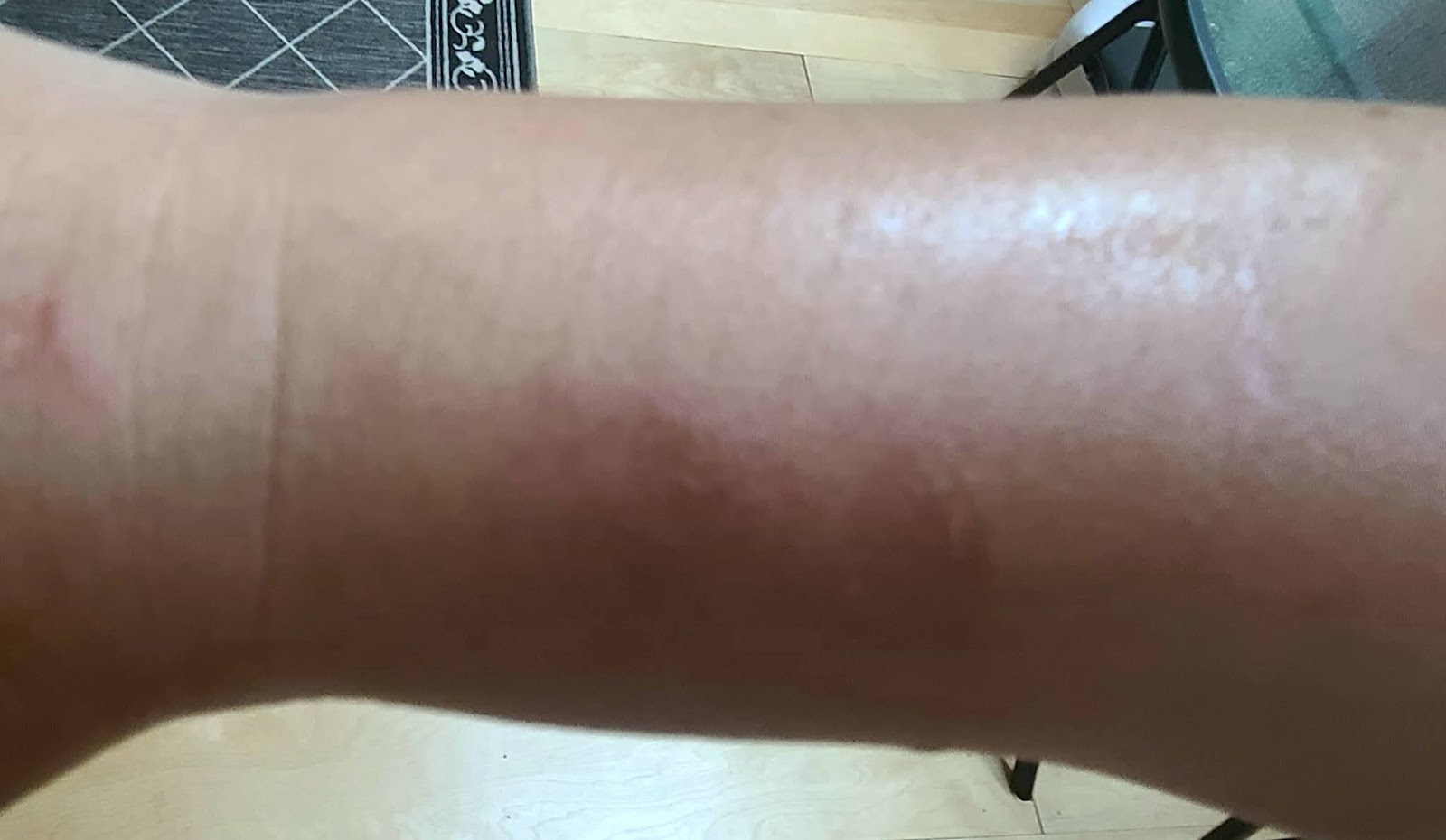 Just an hour or so after.. Here is where the lines really show up 🤔 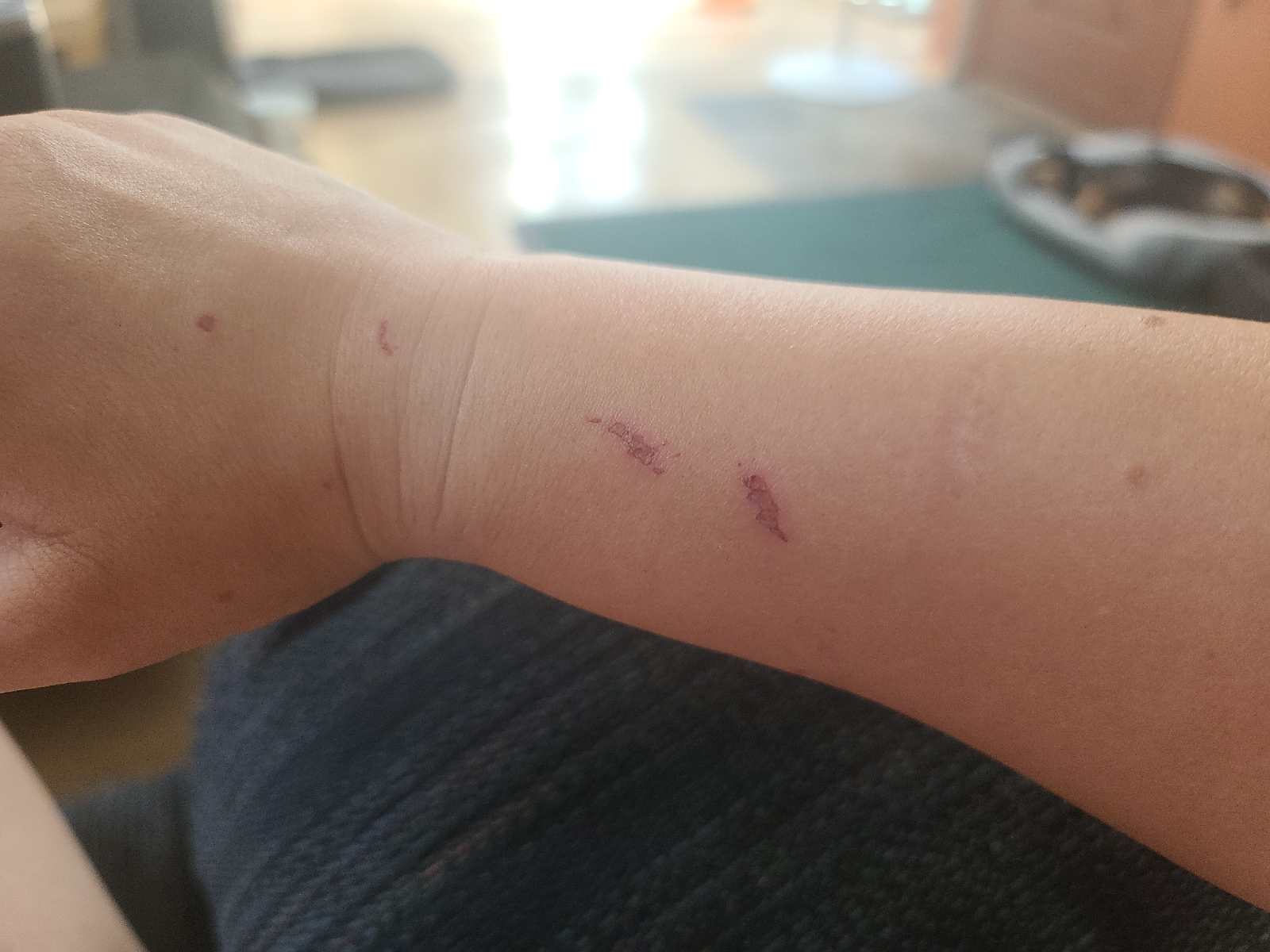 A few days later
Posted by Xesia at 1:21 AM No comments:

More from the crawlspace room

Then just a few days later our contractor was here and had been working on the foundation in the crawlspace room. On his first day he said he kept hearing a female voice asking him. "what are you doing" "why are you doing that" and thought it was me. I got a text from him asking me to come inside the room, and when he told me he heard me talking to him I explained I had been upstairs the whole time. With a puzzled look still on his face, he feels a tug on his shirt. It startled him so much he spun around, flashlight in hand but no one was there.
He asked me if I would come down there to keep him company, and his mind off the fact that he was working in a room were known human and animal ritualistic sacrifices took place.
So the investigator in me of course comes downstairs agreeably, even though I absolutely despise that room and have ever since we moved in. Yet still, I grab my gear and went downstairs to Chit Chat and keep him company while he worked. I was sitting there with my camera, EMF detector, and digital recorder in hand when I wanted to get something out of my pocket I took out my flashlight and upon turning it on I saw what looked like an old piece of cloth.
I went to retrieve it, and as I tried to pull it up I noticed it was a good half a foot down, with only the corner reviled. Now, I said I would never dig in that room again... because after I found that bone, everything changed. Of course, I wondered where the rest or more could be. But I didn't want to further disturb the grounds, especially after finding out the occult ritualistic ties to the property. The soil in that room gets very damp, and therefore is easily moved. So, just from just pulling it up I was able to remove it.
Upon unearthing it, I noticed it looked to be a torn piece of brown canvas material. Upon further examination I thought, maybe a part of a curtain? There was a top part that looked to be hemmed, but each flap was sewn shut. So not a curtain, but something.. or maybe a bottom leg of a pair of pants, or a part of an arm with a hemmed cuff.
So here we are in this room, energy swirling, his fear, my anxiety. The air became thick and hard to breathe.
When I asked if he had seen it, he was as bewildered as I was. As I went to hand it to him to look at more closely the moment of exchange (which I feel was a combination of our energy touching the object) a very uneasy feeling come over both of us.
Immediately we thought the same thing... Was this belonging to the same and, or another victim? Or was it just a piece of clothing cut up for rags left by a previous occupant?
He has been working on the island most of his life, and my house is certainly not the first active house he has worked on. But when he told me, he didn't even want to come back to finish it...
Well, I said "I don't blame you" 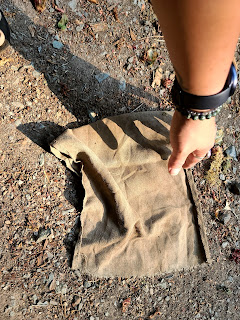 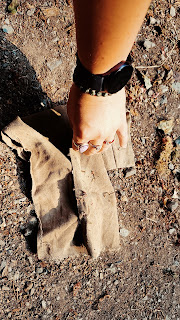 It's been a while!

I'm sorry it's been a while since I've posted anything, but I have been recovering from surgery on my Right arm, which left it very hard and painful to write and type.  However, I am feeling much better, and stronger every day!

I have so many stories to share with you all! Thank you to my loyal readers, and those new and old alike.

- New "treasures" found on the property!

- A New, more violent Entity in the House

- News on the "Cult" that inhabited my house

New Treasures found on the property

Back a few weeks ago I was doing some landscaping, freeing part of the property with some well-needed cutting and trimming back of bushes, etc. When I noticed my dog, Dexter very intent on removing something from under the Treehouse, beneath the foliage. I went over to see what all the fuss was about and found he was digging up a bone.

Now, with all the animals and such here that isn't surprising. And the raccoons have taken old dog bones from the garbage, and left them outside before. Yet looking at it, myself and any other dog owner would know this isn't the kind of bone you can buy for your dog at the farm or pet store. Also, had it been a bovine bone, it would be much bigger. It certainly looks like a leg or arm bone if some kind, but seeing as this is was not found inside the house, there really was no need to have it officially identified.

It could be a deer or something yes, but why only the one bone? If it was remains of a scavenge or animal death, where is the rest? I dug around as much as possible, but found no others. It was so close to the Treehouse, if there is more they must be under the structure.

Spotted a spirit in broad daylight.

This afternoon I was outside on our newly remodeled deck with my roommate and my dog.  He started growling at the chicken coop in our backyard across from the deck.  He was going crazy!!  We both got up to see what he was barking at and there in the window of the coop was a face! it was quick, it popped up, and then after noticing we saw it moved back out of view.

This is the first time my roommate saw something he couldn't explain.  I asked him, "did you see that?!" he said he saw something but wasn't sure what... well, I was.

I saw a full figure in the little structure, through the slats in the wood and a full face in the door.  My dog was going nuts.  I wish I had a camera rolling!

After almost 3 years of living with a skeptic. (which is still fading day by day) what I have saw was finally seen by him, and it brought me a sense of relief. Everyone else that's been here has had experiences yet he's lived here with me for over three years and has had very little. Not that I wish this type of thing on anyone but I have to admit that having some validation with the person who also lives here to me was in an odd way comforting.

The more exposure, the more the activity...Both online, and in real life.

I have been blessed with the opportunity to participate in some podcasts, one radio, one video, and audio. Through the fantastic new streaming channel PARAflixx, the Netflix for Paranormal Content, that is growing in popularity quickly. Full of full-scale horror movies, documentaries, Music Video's and Podcasts..it's everything a paranormal enthusiast wants. These conversations are available to all PARAflix.com subscribers.

Since my first podcast with the fantastic fellows at Insane Asylum LLC Productions, Insane Asylum on YouTube, and the link on my personal, fan, and paranormal page. Things have been going well, after my first podcast, I have been getting some more requests and working on my own YouTube page where I will share investigation footage and past audio, video clips, and photos. Along with the mystery of my current dwelling of almost 3 and a half years now, and putting what I have been putting into writing into visual content for all to see.

Xesia
I am a 39 year old female living on Camano Island in Washington state. I have been haunted all my life. Here are my stories...